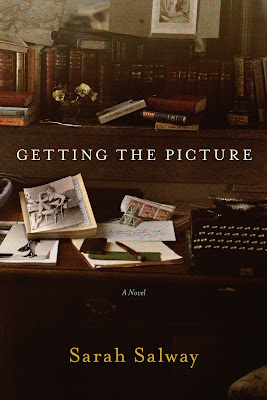 GETTING THE PICTURE, my new novel coming out in April 2010, has just received its first review from Publishers Weekly and phew, they liked it!


Getting the Picture Sarah Salway. Ballantine, $15 paper (240p) ISBN 978-0-345-48101-6
Salway (Tell Me Everything) refutes the adage about old dogs and new tricks in this breezy epistolary novel set in a British retirement home. Not that the residents of Pilgrim House don't know plenty of old tricks already: Salway's appreciation of her characters is refreshingly nonpatronizing—her oldsters have rich and naughty pasts, but live in the present, very much alive and eager to gossip, conspire, and seduce. George Griffiths is the archetypal stuffy widower, determined to control the behavior of anyone near him. He's also the only male resident of Pilgrim House until Martin Morris, a photographer who specializes in female nudes, moves in with his cameras and his photo collection. Martin's a schemer who, unbeknownst to George, had an affair with George's wife decades earlier and has been obsessed with her since; he saved all the letters he wrote her but never sent, and continues to write to her about his increasingly menacing plans. Although the epistolary device requires that some key revelations are reported from a distance, relationships and characters evolve nicely in this lighthearted novel about family and lovers and the not-so-lighthearted secrets that separate them. (Apr.)
Posted by Sarah Salway

Yippee!!!! How exciting!! Does that mean we can buy it? When's the launch? Do you have a new dress?

Thanks, Sue, but no. It's not out until next April and then only in the States. But let's buy new dresses anyway - tea dresses!

woo hoo congratulations!
Can i buy a dress too? can it be Broderie anglaise?
xx

We will ALL buy dresses. Even Brian x

Fabulous - I can't wait to read it! Or get a new dress.

Yay! Can't wait! We get it first, huh? All the better.

Thanks all. It's starting to feel real now...

I am truly and totally and very much excited! Can't wait to read it (and I will wear a dress and drink tea when I do!) x

Actually, I think it might not work if we all wear dresses because there is quite a lot of nudity in book (and on cover). What do you guys think of having the first naturist book launch?

Thanks Caroline the cake goddess, much appreciated!

Whhhheeeeeeehhhhheeeee! It looks brilliant, Sarah. Can't wait to read it. Here's to many more good reviews!

Thanks Claudia and Vanessa - lovely to hear from you both too.

Oooh, exciting!! Congratulations... I can't wait to read it. Will we have to resort to subterfuge to get a copy in the UK?

This is exciting stuff. I wrote some comments recently on my Goodreads about a book I'd read that was epistolary, and I'd had such high hopes, as I think it's such an exciting form, but it fell a bit flat. I can't wait to check how yours measures up ;)

Great cover. Every picture tells a story. Now I think I can set a story in an orphanage in Iowa. Dresses could be involved.
w

This work by Sarah Salway is licensed under a Creative Commons Attribution-Noncommercial-Share Alike 3.0 Unported License.

"Sarah Salway is the Madonna of writing books. The dancing one, not the Mother of Jesus one. Except she's younger and has had less plastic surgery. Sarah Salway that is. Also she writes really well." Neil Gaiman

Details of my new novel, GETTING THE PICTURE, out now
SNAPS- READ MORE 50 WORD PHOTOSTORIES
INFO ON WRITING PROCESS AND TOOLS
GET YOURSELF A DOSE OF SOME BIG INSPIRATION
WRITERS ON WRITING
BOOKS I LOVE

What people have said:


"Salway is fearless in her choice of subjects: she is good on contemporary themes of love, betrayal and twenty-first century isolation, as well as sensuality and violence...This is energetic writing, ripe with menance and wit." Nuala Ni Chonchuir, The Stinging Fly

"Original and charming" Marie Claire magazine
"Relationships and characters evolve nicely in this lighthearted novel about family and lovers and the not-so-lighthearted secrets that separate them" Publishers Weekly
"These short stories explore the often wavering borderland between love and boredom, sensuality and repression, fidelity and betrayal. They are written with a spare and subtle elegance." D M Thomas, author of The White Hotel

Other booky blogs to try

Find some of the writing books I have on my own bookshelf here. Also DVDs, poetry how-to books, and creativity kick starts. There will be more to come. Always more books to come. Just so you know, I do get a small percentage when you buy here, but that makes absolutely no difference to the price you pay.

Come and sit with me on my other blog for a minute.